Book Review: The Signature of All Things

I enjoyed this long, detailed new novel by the author of the famous bestselling memoir, Eat, Pray, Love. Two-thirds to a quarter of the way through reading it, I thought I was going to give this book four stars since it was lagging a bit, but after finishing it, I felt it had pulled through to solidly earn itself five stars instead.

By the end, it gave me a lot to think about. I too accept the theory of evolution, but also think divine intelligence plays a role; to me these two approaches are not necessarily irreconcilable. The missionary who wistfully felt he lacked proof of God gave me something to ponder as well; how are we showing forth our own proof of God’s power?

I will long remember Alma, who I found to be a worthwhile and unusual heroine. I appreciated her scientific approach and her probing curiosity about the world. Her loves were as different as she was, and all in all, her life and passions made for a believable and interesting story. You can read more about the book’s plot in my photograph of the book jacket below.

Meanwhile, here are some bits of the text that I appreciated enough to mark as I read the book. I share them for my own record, as well as examples of the quality of writing in the book (ie. teasers for you.)

• “Each sentence was a crowded village of capital letters and small letters, living side by side in tight misery, crawling up on one another as though trying to escape the page. His spelling was several degrees beyond arbitrary, and his punctuation brought reason to sigh…”

• “He learned how to transplant trees in the springtime, if the soil was retentive and dense, or how to do it in the autumn, if the soil was loose and dry. He learned how to stake and drape the apricots in order to save them from the wind, how to cultivate citruses in the orangery, how to smoke the mildew off the gooseberries, how to amputate diseased limbs from the figs, and when not to bother. He learned how to strip the tattered bark from an old tree and take the thing right down to the ground, without sentimentality or remorse, in order to demand life back out of it for a dozen more seasons to come.”

• “‘Well, child, you may do whatever you like with your suffering,’ Hanneke said mildly. ‘It belongs to you. But I shall tell you what I do with mine. I grasp it by the small hairs, I cast it to the ground, and I grind it under the heel of my boot. I suggest you learn to do the same.’”

• “‘What profound reward you must glean from studying the world so closely,’ Ambrose went on. ‘Too many people turn away from small wonders, I find. There is so much more potency to be found in detail than in generalities, but most souls cannot train themselves to sit still for it.’”

• “‘Religion?’ Henry frowned. ‘What the deuce does religion have to do with being a good minister? It is a profession like any other profession, young man. You fit yourself to the task, and keep your opinions private. That is what all ministers do – or should!’”

• “The old cobbler had believed in something he called ‘the signature of all things’– namely, that God had hidden clues for humanity’s betterment inside the design of every flower, leaf, fruit, and tree on earth. All the natural world was a divine code, Boehme claimed, containing proof of our Creator’s love.”

• “He lacked the rigor of orderly thinking. His writings were filled with shattered, splintered, mirror-fragments of insight. He was irrational. He was credulous. He saw only what he wished to see. He overlooked anything that contradicted his certainties. He started with his beliefs, then sought to make the facts fit around them. Nobody could rightly call that science.”

• “‘There is a universal symphony all around us. There is a hidden means of knowing. I am certain of this, for I have witnessed it myself….the storehouses of the human mind are rarely ever fully opened. When we open them, nothing remains unrevealed. When we cease all argument and debate –both internal and external– our true questions can be heard and answered. That is the powerful mover. That is the book of nature, written in neither Greek nor in Latin.’”

• “He was as constant as a lighthouse. His sincerity was so complete and so perfect, it was almost a mask.”

• “‘I could offer not evidence of my savior, Sister Whittaker, but that which my good wife Mrs. Welles calls ‘internal evidence.’ I knew then and I know now only what my heart feels to be true, you see – that without the love of our Lord, I am a wretch. This is the only miracle I can evidence, and sufficient miracle it remains for me. For others, perhaps it is not sufficient. I can scarcely fault them, for they cannot see into my heart. They cannot see the darkness that was once there, nor can they see what has replaced it. But to this day it is the only miracle I have to offer, you see, and it is a humble one.’”

• “‘I know what I am. For one thing, I am a rauti. I am a haranguer, as my grandfather was before me. I come to the people and chant out encouragement. My people have suffered a great deal, and I push them to be strong again – but in the name of Jehovah, because the new god is more powerful than our gods. If that were not true, Alma, all my people would still be alive. This is how I minister: with power. I believe on these islands the news of the Creator and of Jesus Christ must be communicated not through gentleness and persuasion, but through power. That is why I have found success where others have failed.’”

• “Here is the story that Alma wanted to tell: The natural world was a place of punishing brutality, where species large and small competed against each other in order to survive. In this struggle, the strong endured, the weak were eliminated….But Alma’s story has a twist. Alma hypothesized, and had come to believe, that the struggle for existence – when played out over vast periods of time– did not merely define life on earth; it had created life on earth. It had certainly created the staggering variety of life on earth. Struggle was the mechanism…. Struggle explained everything. The planet was a place of limited resources. Competition for these resources was heated and constant. Individuals who managed to endure the trials of life generally did so because of some feature or mutation that made them more hardy, more clever, more inventive, or more resilient than other… Under the wrong circumstances, anything was capable of extinction. But under the right circumstances, anything was capable of transmutation.”

• “‘The greater the crisis, it seems, the swifter the evolution… All transformation appears to be motivated by desperation and emergency.”

• “Here was the hole in Alma’s theory: she could not, for the life of her, understand the evolutionary advantages of altruism and self-sacrifice…. Why do kindness and selflessness exist?”

• “ I believe we are all transient… I believe that we understand very little, and what we do understand is mostly wrong.”

I hope you find a chunk of time to read this remarkable book. My hat is off to Elizabeth Gilbert for this well researched, sweeping saga. I found it exceptionally perceptive, evocatively honest, and refreshingly atypical. 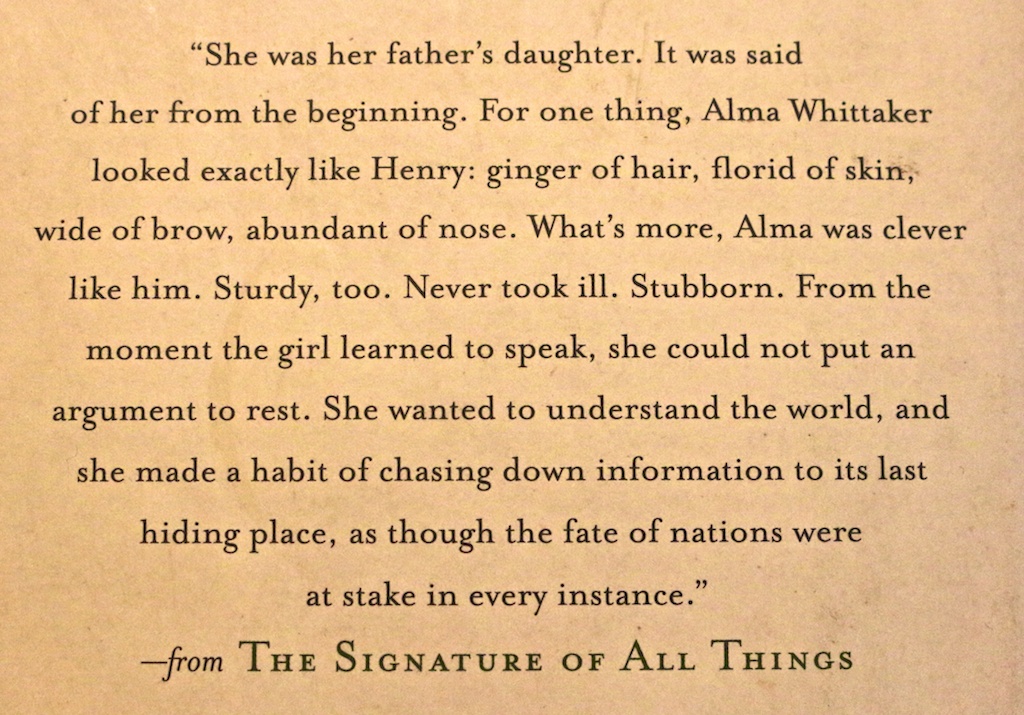