Names for Abstract vs. Non-Objective Paintings 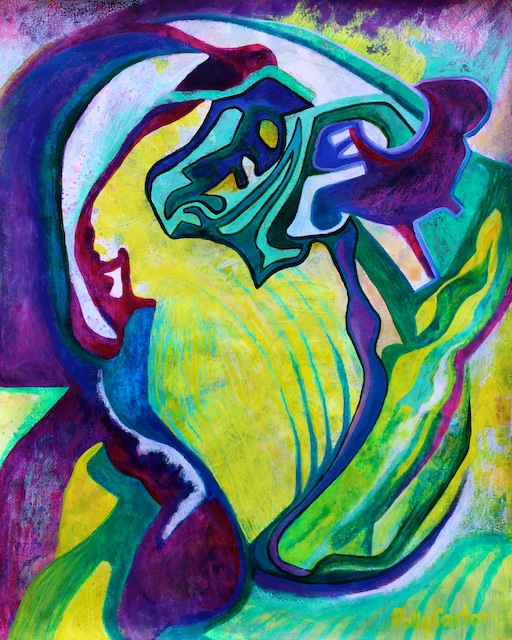 I Always Knew You Would Grow Up (acrylic) by Polly Castor

I had an interesting conversation about painting titles with a fellow blog reader at the show I went to recently. She ardently maintained that titles were irrelevant, superfluous. I was surprised by this since she had a painting of a one winged bird titled “Left Wing Radical,” and I felt the title added to my understanding of what she was trying to do in the piece. But she continued to assert her position that when a juror looks at a piece they don’t need to see the title, since the painting should stand on its own.

The reason I want my title seen by a juror is that when I am doing an abstract work, I am striving to express a particular idea (such as here or here), which is much more elusive than a waterfall or a flower.  That is what makes it abstract, and I start out pondering deeply that intention or goal. Often what we call abstract art is actually purely non-objective work with an arbitrary title tacked on. This is so much the case that most people assume that is all it ever is, which frankly irritates me.

Either way, I think the works “stand on their own.” But I know from experience that doing genuine abstract work (i.e. consciously attempting to depict something abstractly) is much more difficult than doing non-objective work. So when doing abstract work, I desire very much to keep the title attached to the piece to help the viewer appreciate my original objective. When you are painting a waterfall or a flower, your basic objective is obvious, but that is not so clear with just-as-valid non-material themes. My ultimate motive is to aid the viewer into deeper contemplation and understanding of the subject depicted. I want to be clear that I am making a visual statement of a more metaphysical idea or concept, and not just noodling around in a pleasing way.

Generally, I concede her point about titles being at best merely “value added.” This is especially true if all you are interested in as a juror is a check list of composition, value contrast, and technical skill, and if you expect to be looking at paintings of literal, recognizable things.

What the piece of art is saying to each person will still be their own interpretation, regardless whatever you call it, but this will be doubly true if they don’t get to see a title, or if there was no intention to the piece to begin with. How many times have you been in an art museum, and reading the little card next to a piece helped your awareness of what was being expressed, and you realized it was more meaningful than you at first anticipated? Is not an important part of art to move thought? And could not part of that be legitimately done by a title?

So all this has gotten me thinking. I like the discipline and challenge of portraying abstract concepts, but maybe I should simply wing it more, and just be led, expressing myself without such clear, laborious intention–especially since my arduously explored, soul searched topics with their deliberately deep meanings seem to often flow right past my audience.

Now I am wrestling with a moral conundrum. Do I start a new “non-objective” tag on this blog and collect these works in there, or do I go along with exasperatingly sloppy convention and lump them in with my abstract work? I suppose I will reluctantly let them dwell under my “abstract art” tag, even though everything in me wants to flare at that, and educate the world on the difference. I guess my desire for people to see all my non-representational work in one place supersedes my inclination to be a stickler. But from now on, if a post on this blog is labeled as “non-objective” instead of “abstract,” you can know that the intention was looser and the title means less, even though they will “stand on their own” just the same. 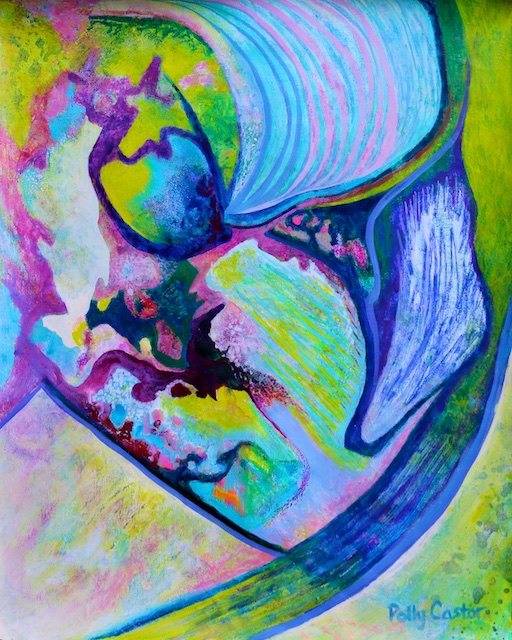 I’m Glad We Can Talk (acrylic) by Polly Castor