Newspaper Article by me: Uncontentious Elections 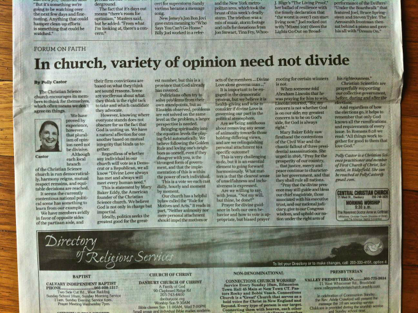 I am a regular contributor to the Danbury News Times Forum on Faith column, which is also picked up by the Connecticut Post and the Stamford Advocate.  They write the headlines, which usually I think are good, but the headline on this one missed the mark.  This article was due before hurricane Sandy hit, and wasn’t probably noticed much during the recovery from that situation.  Anyway, it expresses still a needed sentiment regarding politics in this country… so here is today’s article:

The Christian Science church encourages its members to think for themselves, which often means we don’t always agree on everything, but we have proved by experience that pluralism of opinion need not be divisive.

Although each local branch of the Christian Science church is run democratically, harmony still reigns, mutual respect remains, and equitable decisions are reached. It seems the currently contentious national political scene has something to learn from our example.

We have members avidly in favor of opposite sides of the partisan aisle, and these individuals support their positions by firm convictions based on what they think are sound reasons. Some are vociferous about what they think is the right tack to take and what candidate they advocate.

However, knowing where everyone stands does not obscure for us the fact that God is uniting us. We have a natural affection for one another based on mutual integrity that binds us together.

Regardless of whether any individual in our church will vote as a Democrat or a Republican, we all know that, “Divine Love always has met and always will meet every human need.” (This is statement by Mary Baker Eddy, the American founder of the Christian Science church.)  God is not only in charge but impartial.

Ideally, politics seeks the greatest good for the greatest number, but this is a province that God already has covered.  Politicians try to solve problems from their own standpoints, but as Einstein observed, problems are not solved on the same level as the problem; a larger perspective is needed.

Bringing spirituality into the equation levels the playing field automatically.  Following the Golden Rule and loving one’s neighbor as oneself even if they disagree with you, is the strongest form of government, and the implementation of that is within the power of each individual. This is a vote we each cast, daily, hourly and moment-by-moment.

Our church has a helpful bylaw called the “Rule for Motives and Acts.”  It reads in part, “Neither animosity nor mere personal attachment should impel the motives or acts of the members… divine Love alone governs man…”

It is important to be engaged in the democratic process, but it is health giving and wise to consider if divine Love is governing our part in the political atmosphere. Are we being assiduous about removing any sense of animosity towards those holding differing views, and are we relinquishing personal attachment to a specific outcome?

This is very challenging to do, but it is an essential element to going forward harmoniously.  What matters is that the clearest sense of unselfishness and inclusiveness is expressed. Are we willing with Jesus to say, “Not my will, but thine, be done?”

Prayer for divine guidance in both our own behavior and how to vote is appropriate, but biased prayer rooting for certain winners is not. When someone told Abraham Lincoln that he was praying for him to win, Lincoln retorted, “ Sir, my concern is not whether God is on our side; my greatest concern is to be on God’s side, for God is always right.”

Mary Baker Eddy saw first hand the contentions of the Civil War and the chaotic fallout after three presidential assassinations. She urged in 1898, “Pray for the prosperity of our country,.. that justice, mercy, and peace continue to characterize her government, and that they shall rule all nations.  Pray that the divine presence may still guide and bless our chief magistrate, those associated with his executive trust, and our national judiciary; give to our congress wisdom, and uphold our nation under the right arm of his righteousness.”

Christian Scientists are prayerfully supporting our collective government, before, during and after the elections. And regardless of how the elections go, it helps to remember that only God knows all the ramifications and requirements of every issue.  In Romans (8:28) we read: “All things work together for good to them that love God.”

By Polly Castor, a Christian Science practitioner and member of First Church of Christ, Scientist, Ridgefield, CT.  She can be reached at PollyCastor@gmail.com 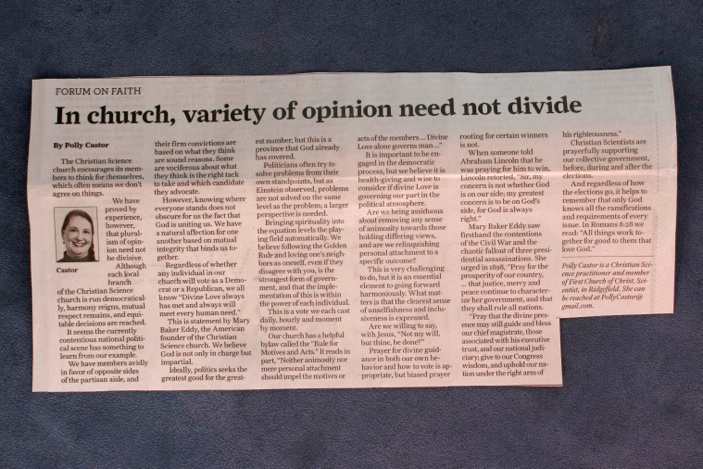 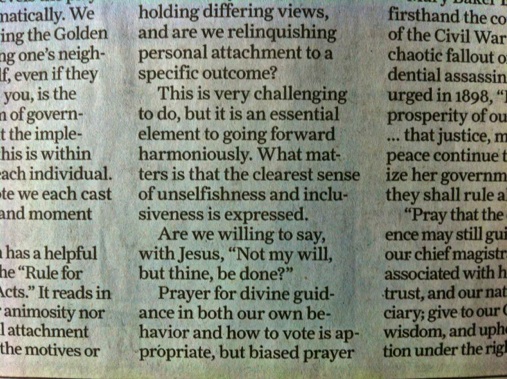 - A Visit to the Katonah Museum to see Art by Women http://aweber.com/t/JN0vf

- You are Never Weary (Quote by Ezra W. Palmer) http://aweber.com/t/Qaqhr