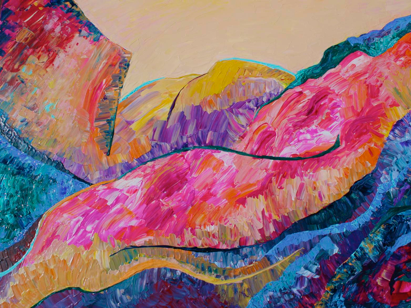 I’ve let this blog post gestate a while before writing it today.  I waited to find my peace about this first, but still it seems to me there are issues here that bear discussing.  Several factors have converged to make me feel this way.

First, I painfully listened to an award winning representational artist teach a class things that were not true about abstract art.  This really got my hackles up, since misunderstanding should not be promoted as truth.  With such false education going on, no wonder there is a seeming polarity expressed and experienced between abstract and representational art.

Next, I had the above painting blatantly and viscerally turned away from even being seen by the juror for a representational juried show for the Kent Art Association (click here to see their info.)  Now please note that I am capable of work smacking more representational than the one above (click here for an example), but the above work, titled Zion Dreams, is of a landscape at Zion National Park in Utah, and is much more representational to me than so much of my clearly abstract work (click here or click here for examples.) Why did I choose to take this painting and not one that “conformed” more? I chose it partly because it was done in oil, which I had been told was preferred for this highbrow organization. But I also chose it because, to me, good art shows an interpretation of the subject matter, which I had carefully accomplished in this piece.

When I walked in the door with this painting, I was immediately accosted with a grimacing face that told me, “You’ve done something wrong already.” The entry form clearly requested that you use one piece of tape and affix it to the back upper left hand corner of the painting, which I had dutifully done.  She now informed me coldly that I wasn’t supposed to do that until I arrived! After wondering if church is the only place it its a good idea to treat a newcomer warmly, I sloughed off this attack and handed her my painting, which she hadn’t seen yet as I had walked in with it back first.  Next she tells me, “We can’t take this. Its too abstract.”  I countered pleasantly that it is a landscape, and that maybe we should let the juror decide. But she was adamant, and went for back-up.

She returned with a woman artist who is known to me and heads up an art group even closer to my home, which I am a member of, and whose shows have been on this blog. I was surprised to see her there because we were both far from home; I realized I had underestimated the range of her fiefdom.  Now, even though she was not the juror, she told me with hostile, defensive authority, that they wouldn’t even consider wasting the juror’s time with my painting.  It wasn’t representational. She couldn’t tell what it was.  Maybe it was a wave? I told her it was clearly a landscape. She said that representational painting “allowed for no interpretation at all of the literal.” I’m thinking that if I wanted that, I’d take a photograph.  So I left with my painting, because I can tell when I’m not welcome.

I felt like an Impressionist painter, excluded from the officious Salon, because they were doing something fresh and inspired and new, and not blindly complying to the strictures of the old masters.  They had to go have their party somewhere else with like-minded people, but who are those people for me? (If you’ve got ideas, please let me know.) I had just finished reading Madeline L’Engle’s book (click here for my review) and read how her fabulous book “A Wrinkle in Time” was banned; it was deemed threatening because it made people think. Then I recalled when my sisters and I had competitively played instrumental music as young adults, my parents used to refer to what they lightly termed the “music mafia.” So this not-so-funny behavior crops up everywhere, and is just human nature I suppose.  As I watched a documentary on Van Gogh, I realized they wouldn’t have let the jurors in Kent see Starry Starry Night either, and he’d have been turned away too, for possibly painting waves.  I decided I was in good company.

As I got past indignation, incredulity, and even self-justification, I realized what matters to me in all this is the question, “What is art.”  And I don’t just mean it when we stand at a contemporary museum looking at the smashed plates in the corner that we’ve paid good money to view.  But what is art really representing?

Meanwhile, another factor fused in here.  I went to my local juried show (which I did not enter even though it wasn’t explicitly representational) and there was some art there I really enjoyed. But the award winners both here and in Kent were the two artists described above, who do lovely literal art, but frankly it says nothing more than a photograph.  I had valued their work for their skill at drawing until I just learned that they use a projector to project their photo onto their paper taped to a wall, trace it, and then color it in.  When I heard that, my head swam. That’s a bit like paint-by-number or coloring books to me. Is that art?  Or is it simply craft or mere technique? That kind of work asks no more of me than looking at a flower or at the street scene itself; I have only what I bring to it.  What makes Van Gogh’s art great is that even though we may be looking at his painting of a field, we are really looking at a window to his soul, and come to understand and care about him.

I realize now, it’s not because they don’t like non-literal art or even don’t understand it, they are threatened by it.  It takes courage and heart and freedom. It takes looking deep within and finding something genuine there to share. It takes being willing to be imperfect in front of people, a transparency for how you and only you view things.  This is hard for someone that needs validation or approval, because inherent in the situation is the fact that no one else will ever see it as you do!  (This unique outlook is exactly what you have to offer and only you can bring it out and paint it, whereas purely technical work can be done by anyone with proficiency that doesn’t have to be unique to you.) Also required for not so literal art is faith that people will try to understand, or at least will suspend their judgement for just long enough to look through the window provided for them, to feel what someone else felt, and maybe even commune with their soul.

So I come away from all of this with clarity.  If some folks want to represent uninterpreted street scenes and flowers, fine. Since to me we have cameras for such things that don’t require hand duplication, I feel it is more important to represent your heart and soul, who you are and what you experience as you see something.  I’m glad my art is just as it is, evolving with me and expressing the deep authenticity that I am consciously spiritually cultivating. As Mary Karr pointed out, “The excellence of every art is its intensity.”  Van Gogh and I have that going for us, and that is enough to genuinely represent! 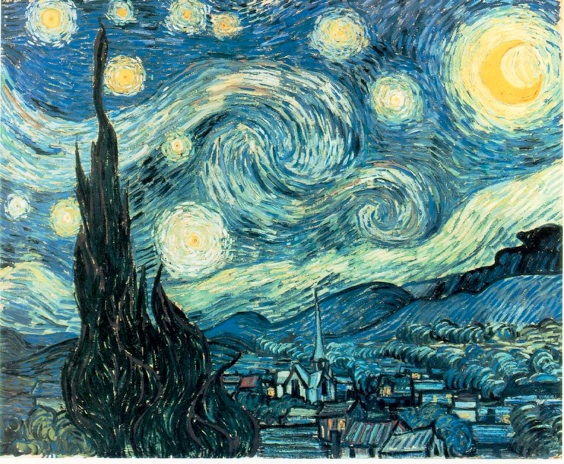