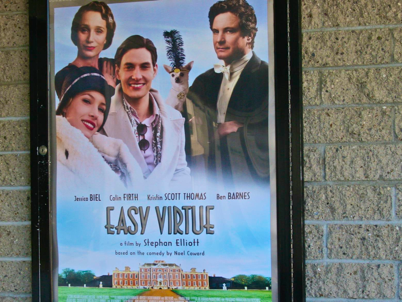 I wanted to like this film. After all, it had Colin Firth, English aristocratic country homes, and a tango scene; all that made it seem rather compelling. But knowing it was based on a Noel Coward play, I should have had my guard up more about the story-line. I found the whole film a disappointment and am debating whether it was good enough to get three stars or to rank it at only two.

The movie was jerkily choppy in its editing and scene changes. It took nearly half the film to get the gist of who was who, and once you had that down – with too much effort – you find don’t really care about any of them. There were a couple good shots, like the mother’s face reflected in the 8-ball, and afterwards, there is the interesting question to ponder about whether there is even such a thing as easy virtue. But it was all such an unnecessary sad waste, and poorly done to boot, that I’d recommend you not squander your time watching it unless you are really bent on seeing something that can make you melancholy. This movie can deliver that, as well as provide a showcase for much cigarette smoking. I considered not even reviewing this film, but found I wished I had been warned, so I’m doing you that favor.