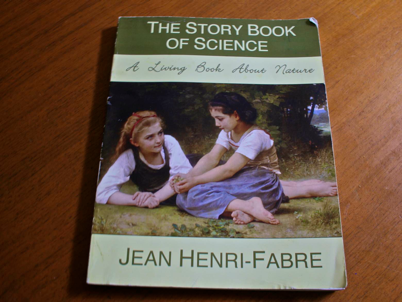 I read this classic book by Jean Henri-Fabre (France 1823 – 1915) to my homeschooled 6th grader as supplementary science material this year. She gives the book four stars in general, and five stars in the category of “school books.” She would often pick it out of the stack over other ongoing things.

Originally published in 1917, this is detailed science writing about nature, done in story form. “Uncle Paul” teaches his niece and nephews about nature with a passion and zeal rarely seen in science books.

The book was slow going, but we were savoring it and were not in a hurry. The chapters are short. It took us the whole school year to finish the 80 “stories” contained in the book. Our pace being leisurely, we enjoyed “Uncle Paul” (as we came to call to this book) and each session we either learned something new, or had our interest in something renewed or expanded. And the author’s Godly perspective often left us discussing interesting implications of what we had learned. Because of the discussion possibilities, this book is best as a read aloud, and I believe was originally intended as one.

For example a profound discussion followed this: “There is no difference between queen-eggs and working bee eggs. Its treatment alone decides the issue for the egg. Treated in a certain manner, the young larvae becomes a queen, on whom depends the future prosperity of the hive; treated another way, it becomes one of the working people and is furnished with brushes and baskets. And what does not treatment, or education, accomplish with us in our tender years?”

He relates things in ways that were easy to picture, definitely talking to children but not down to them. For example, he compares the size of the earth to the sun in this way: “If we suppose the sun a hollow spherical box, to fill it would take one million four hundred thousand balls the size of the earth.”

We learned that volcanic orifices are safety valves and without them we would have many more disastrous earthquakes. We learned about how the ants milk their own cows (!), how to tell some poisonous mushrooms from others, how pearls are made, how to remove venom from bites, and lots more.

Here is an example of how a conversation of God would work it’s way into a topic: “Imagination vainly seeks to picture the stupendous mass of the layer of air wound like a scarf by the creator around the earth. Now do you know what relation it bears to the terrestrial globe – this ocean of air having a weight represented by half a million copper tubes (nine thousand millions of kilograms each) a quarter of a league each way? Scarcely what the imperceptible velvety down of a peach is to the peach itself. What, then, are we materially, we poor things of a day, who move about at the bottom of this atmosphere and the earth itself! In vain does the material universe overwhelm us with its immensity; the mind is superior to it, because it alone knows itself, and it alone, by a sublime privilege, has knowledge of its divine author.”

The units of measure in this book are not only foreign but antiquated so involve translation between degrees Celsius, fathoms, decigrams, etc. For example:

“The subterranean temperature increases with depth one degree for every thirty meters. It is estimated that three kilometers down the temperature must be that of boiling water at 100 degrees Celsius… five leagues down, that of red-hot iron, and at twelve leagues sufficient to melt anything.”

We became comfortable with other forms of measurement through this book, as well as relative worth of foreign currency almost 100 years ago.

The vocabulary used was at times difficult, which makes older elementary probably the target age for this book, but the context always made things clear so I think younger children could enjoy it as well. The story form, with the children asking questions and marveling along side Uncle Paul, combined with interesting information make it accessible to a wide range of ages. The science itself struck me as amazingly accurate; who knew that they knew so much so long ago? There was even a discussion about relative motion on trains, which actually didn’t have a “theory” until Einstein.

In this edition, the text was hard to read as it was too wide on the page so tracking down to the next line was not as easy as it should have been (see picture below). I would recommend instead the Yesterday’s Classics version sold on Amazon (see here) as it has more readable text.

In this book, the author’s infectious enthusiasm and animated, genuine interest in nature, as made by God, makes all the work worth it. We are glad to have done it nice and slowly and will long remember the things we got out of it. 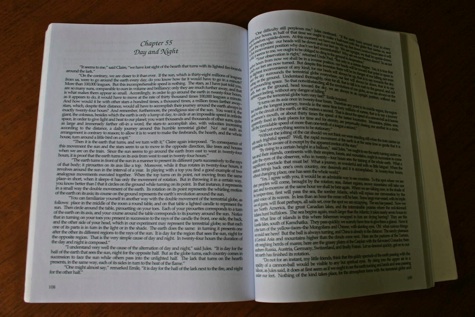